The FN Herstal FN 509 is a high-capacity striker-fired pistol chambered in 9x19mm designed to meet the specifications of the military XM17 Modular Handgun System competition. It is a highly durable and reliable full-size handgun designed to function even under the harshest conditions.

If you are among the law-abiding American citizens owning this highly capable pistol or one of its variants, you’ll need an equally reliable gun holster to carry it safely.

The FN 509 is a semi-automatic pistol manufactured by Fabrique Nationale de Herstal (FN Herstal) and offered to the U.S. civilian market since 2017. It is chambered in 9x19mm and features everything you’d expect from a modern combat pistol: a polymer frame, a striker-fired single-action mechanism, a trigger-mounted safety, and an accessory rail.

The 509 is an evolution of the earlier FNS-9 and even features a similar magazine design and an identical magazine capacity (17 rounds). The only difference is the baseplate; while an unmodified FNS-9 magazine will not fully seat in the 509, you can swap the baseplate for a 509 baseplate to make it compatible with the newer pistol.

Although the standard FN 509 and the FN 509 Tactical are full-sized pistols initially designed for duty use, it is possible to conceal-carry these handguns with the right holster and sturdy gun belt.

The Incognito Concealment T3 inside the waistband (IWB) holster was explicitly designed to be a low-profile, high-durability carry holster that gun owners can use to conceal-carry handguns of any size as effectively as possible. Its thin Kydex sheet construction provides a combination of comfort and concealability that enables every day, all-day carry without risk to you or your firearm.

The T3’s integrated sweat shield protects your 509’s steel slide from exposure to sweat and body salts, which can damage the finish. It also features an adjustable ride height and cant angle, helping you fine-tune your holster to your body and maximize your handgun’s concealability.

Accessories for your Incognito T3

Additionally, the T3 is compatible with a selection of accessories and options to help you enhance your carrying comfort, regardless of your pistol’s configuration. For instance, if your FN 509 is equipped with a tactical light or a laser sight, we offer versions of the T3 holster that can fit your handgun and any one of these accessories:

We also offer mod-wing attachments, letting you carry your T3 holster in the appendix-carry position more efficiently. The mod-wing is a textured plastic tab designed to push your waistband outward, creating leverage and preventing the grip of an appendix-carried pistol from tilting forward.

The mod-wing’s action helps reduce printing and improves your concealability, which are crucial factors when carrying a full-size pistol such as the FN 509.

Duty handguns such as the FN 509 were designed for carrying by military personnel in standard-issue outside the waistband (OWB) holsters. If you are a civilian interested in OWB carrying the FN 509, the Incognito Concealment Venture is the ideal solution.

The Venture employs the same sturdy materials as its IWB equivalent but is adapted to OWB carry instead. It features an open-ended holster shell, a contoured design, and comes fitted with two high-strength metal belt clips.

Note that while the Venture for the Standard version of the 509 can accommodate a threaded barrel, it will not fit an unmodified FN 509 Tactical due to its factory suppressor-height iron sights. Incognito Concealment offers holsters for both the standard and the Tactical models at your convenience, including versions with a sight cut for 509 Tactical pistols equipped with a micro red dot sight.

Although traditional belt holsters are safe, secure, and comfortable when carried in normal conditions (e.g., standing, walking), bending down, sitting down, or getting into awkward positions. Occasionally, these positions can cause the gun or the holster to dig into your body, creating undue discomfort.

A high-quality paddle holster such as the Incognito Concealment ST7-Pro is a convenient alternative for gun owners who spend significant amounts of time in vehicles or other seated positions.

Instead of belt clips, the ST7-Pro employs a large-sized plastic paddle tipped with a set of gripping teeth. Wearing the ST7-Pro is easy; press the top of the paddle, insert the paddle into your waistband and let go of the paddle to allow the teeth to grip your pants. Friction secures the holster to your clothes, letting you carry your FN 509 safely.

The most significant advantage is the possibility to reposition and adjust your holster on the fly, maximizing comfort regardless of your position. For example, you can change the holster’s ride on your waistband before entering or exiting a vehicle without the hassle of undoing a traditional gun belt.

Although the FN 509 pistol has a total capacity of 17+1 rounds with a fully-loaded standard magazine, having spare magazines at your disposal can bring you additional peace of mind, regardless of your preferred holster and carrying position.

Incognito Concealment offers a selection of high-quality Kydex magazine carriers to increase the amount of ammunition in your everyday carry (EDC) setup. Whether you prefer discretion or maximum preparedness, Incognito has the magazine carriers you need to complete your FN 509 EDC setup.

If you enjoy conceal-carrying your FN 509 with our IWB T3 holster, the Incognito Stash single IWB carrier is an ultra-lightweight solution compatible with the same belt clips as the T3 holster.

The M1 is an OWB equivalent to the Stash, featuring a single magazine pocket and a single belt clip, prioritizing a lightweight construction over capacity.
In contrast, the MAXFP lets you carry two spare magazines and is secured to your gun belt using two belt loops for better weight distribution.

Exercise your Second Amendment rights and carry your FN Herstal FN 509 confidently with one of our quality EDC holsters. All our holster products can be ordered in left- and right-handed configurations and are available in over 50 color and pattern options such as tactical black, Coyote Brown, Flat Dark Earth (FDE), and Arctic Camo. We also offer patriotic patterns such as Freedomflage, We The People, and Thin Blue Line.

Feel welcome to browse through our Search by Gun Collections to find the right holster for your firearm. 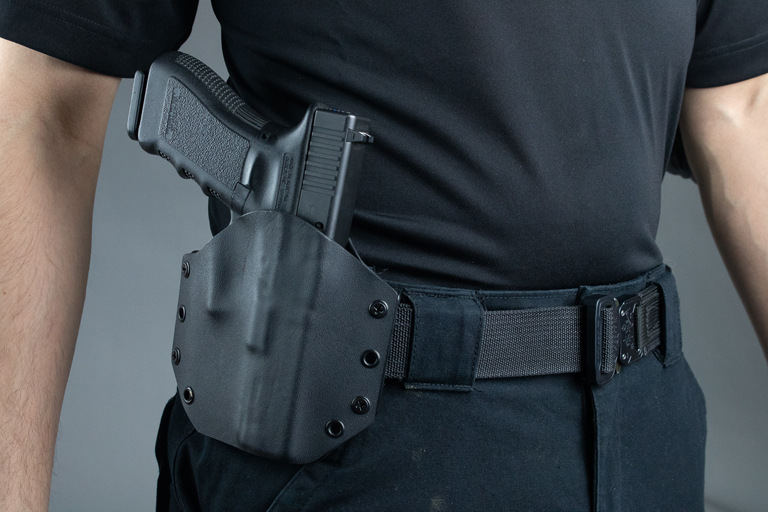 Fast Shipping On All Orders

The majority of Incognito Concealment holsters are made at the time of order to the exact specifications and preferences chosen by the customer. Because of this, we do not accept returns or issue refunds on items that were made correctly according to the customer’s order form. An order may be canceled up to 24 hours after it is placed, provided that production has not already begun. If you would like to cancel an order, the request must be sent in writing via email. Please include your name, phone number, order number, and reason for cancelation in the email.  Cancelation requests must be emailed to: sales@incognitoconcealment.com. Custom orders returned or canceled after the 24 hour period are done so at our discretion and may be subject to a 50% restocking fee. Shipping will be arranged and paid for by the customer. By placing an order with us, you are consenting to our terms and conditions, to include our return and cancelation policy.

Incognito Concealment offers a Lifetime Warranty on all of our holsters for the original owner for manufacturer defects. If you feel your product is defective, broken, or does not fit correctly, please contact us via phone at (586) 257-1686 or email at sales@incognitoconcealment.com. We may request photos or videos for further clarification of the issue. If we deem the product to be damaged or defective from the factory, we will issue repairs as necessary, up to and including completely replacing your product as well as paying return shipping.

We offer a 30 day money back guarantee on our quick ship inventory items because we believe in our products. Reference our page of quick ship items here. These items are eligible for return or exchange if you are dissatisfied with them for any reason. This does not include shipping to or from shipping costs. We do not sell used holsters so if the product has been damaged it will not be eligible for return.